Thursday 9am to 2pm

Made with Market ingredients

Every Thursday from October thru May from 9 AM - 2 PM, the best local growers and food artisans in our region gather at the Englewood Farmer's Market located in the heart of historic Dearborn St. in Englewood, Florida. It's THE event of the week where you can shop for local and organic fresh Florida produce directly from local farmers, find wild caught Florida seafood from local fisherman, select from seven gourmet bakers including gluten free, taste and sample international artisan food creations, discover the amazing selection of flowers, plants and trees from our green space vendors, and of course enjoy the music and ambiance of a true food and agricultural market experience. It's a great destination to meet your friends and neighbors, shop, and enjoy our fantastic Florida weather! Check out our vendor directory for descriptions of their products and how to contact them directly!

OUR MISSION: to promote local Florida growers and agriculturally related products with a focus on our four core values of nutritional health, education, sustainability, and sense of community.

ENGLEWOOD — Even Lee Perron never imagined the Englewood Farmers Market would be as successful as it is.

The Englewood market will be back 9 a.m. to 2 p.m. beginning Oct. 3 and every Thursday after that until May on the 300 block of West Dearborn Street at the Pioneer Plaza.

In 2011, Perron imagined it to become a small community market on West Dearborn Street with local growers and vendors selling fresh produce and other commodities. According to Sun reports, in November 2011, the opening day of the Englewood Farmer’s Market saw 17vendors, 21 booths and attracted 1,500 people.

Now, Perron, the manager of the nonprofit market, said more than 80 vendors are on a waiting list and the market attracted 8,000 or more people regularly last year. The Englewood Farmers Market now is also attracting the interest of growers from Florida’s East Coast and elsewhere in the state, something Perron never expected.

The success of the Englewood Farmers Market even impressed Atlanta Braves representatives who asked Perron to start up and manage a similar nonprofit market. The seasonal West Villages Market will operate Wednesdays from October through March, at the Atlanta Braves Spring Training Facility, 18800 S. West Villages Parkway.

Many of the same vendors intend to sell their wares at both the West Villages and Englewood markets. Perron does not see the two markets competing with each other, but rather, they will complement each other. He also manages the nonprofit farmers market Saturday mornings at the Venice City Hall.

Citing the growth in West Villages and North Port that the Villages Farmers Market could serve, Perron suggested the Englewood market shouldn’tlose customers nor vendors, but will level out to what can be handled and provide positive experiences for both customers and vendors. 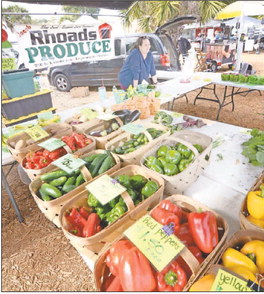 Jessica McDowell, of Rhoads Produce in Englewood, stands by near the many produce on sale at last year’s Englewood Farmers Market. Organizers are getting ready to reopen Oct. 3 at 300 W. Dearborn St.

The success of the Englewood Farmers Market can be measured by how it helps others.

As a nonprofit under the tax-exempt status of the Friends of Sarasota County Parks, the Englewood Farmers Market contributed more than $84,000 to local charities and other nonprofits from 2011 to 2018. Beneficiaries include the food banks at St. David’s Jubilee Center and Englewood Helping Hand, The Englewood Community Care Clinic, New Paradigm, Friends of Sarasota County Parks and Englewood Elementary School. Email: Steve.Reilly@yoursun.com 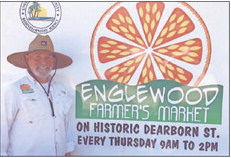 Lee Perron is manager of the Englewood Farmer’s Market on Englewood’s West Dearborn Street. He’s ready to reopen the weekly market on Oct. 3.

County commissioners will consider changing a county ordinance that will limit the number of arts and crafts, jewelry, health and health services, and other non-food vendors to only 25 percent of the total number of vendors. The discussion is set for Nov. 6.

If the ordinance is changed, 75 percent of the remaining vendors must sell vegetables, honey and cheeses, spices, coffees or any other food product, including artisan and prepared foods. The county ordinance now allows a 50-50 split to the products sold at farmers markets.

Farmers markets are held along West Dearborn Street on Thursdays from October to May.

The nonprofit Englewood Farmer’s Market was the first in Englewood, opening eight years ago at the Pioneer Plaza on the 300 block of West Dearborn. Joyce Colmar opened her for-profit Dearborn Street Market across the street. Since then other smaller markets have been sprouting up along and around West Dearborn.

Englewood’s Community Redevelopment Agency staff has been meeting with market managers in an ongoing discussion to devise a reasonable formula and methodology for determining enforcement. The call for the modification of the farmers markets, CRA manager Debbie Marks said, came from various brickand- mortar Dearborn merchants who felt that the arts and other non-produce vendors undermined their businesses last year.

To define the ratio of vendors at the markets, the managers and CRA discussed Tuesday how a 10-by-10-foot space could equate to one unit of vendor’s space.

“I have vendors who are paying for five booths,” Colmar said.

Will that affect the ratio of food to non-food vendors?

And how will county code enforcement determine who is or isn’t in compliance, Englewood Farmer’s Market manager Lee Perron asked.

Zeros and ones. Either it is or isn’t (in compliance),” Perron said.

Marks suggested a county official could visit a particular market and determine whether the market is meeting the guidelines at the outset of the season. Reporting any subsequent changes would be the responsibility of the managers, she said.

“We need to support our locals first and foremost,” DonnaMarie Lee said.

Lee manages a small farmers market Thursdays, but she also is co-owner of Bobarino’s Pizzeria on Magnolia Avenue at West Dearborn.

“We need to focus on our town first, community first,” she said.

“Then we can bring in the extras.”

Interested in becoming a vendor at The Englewood Farmers Market? Get started by downloading a vendor application!